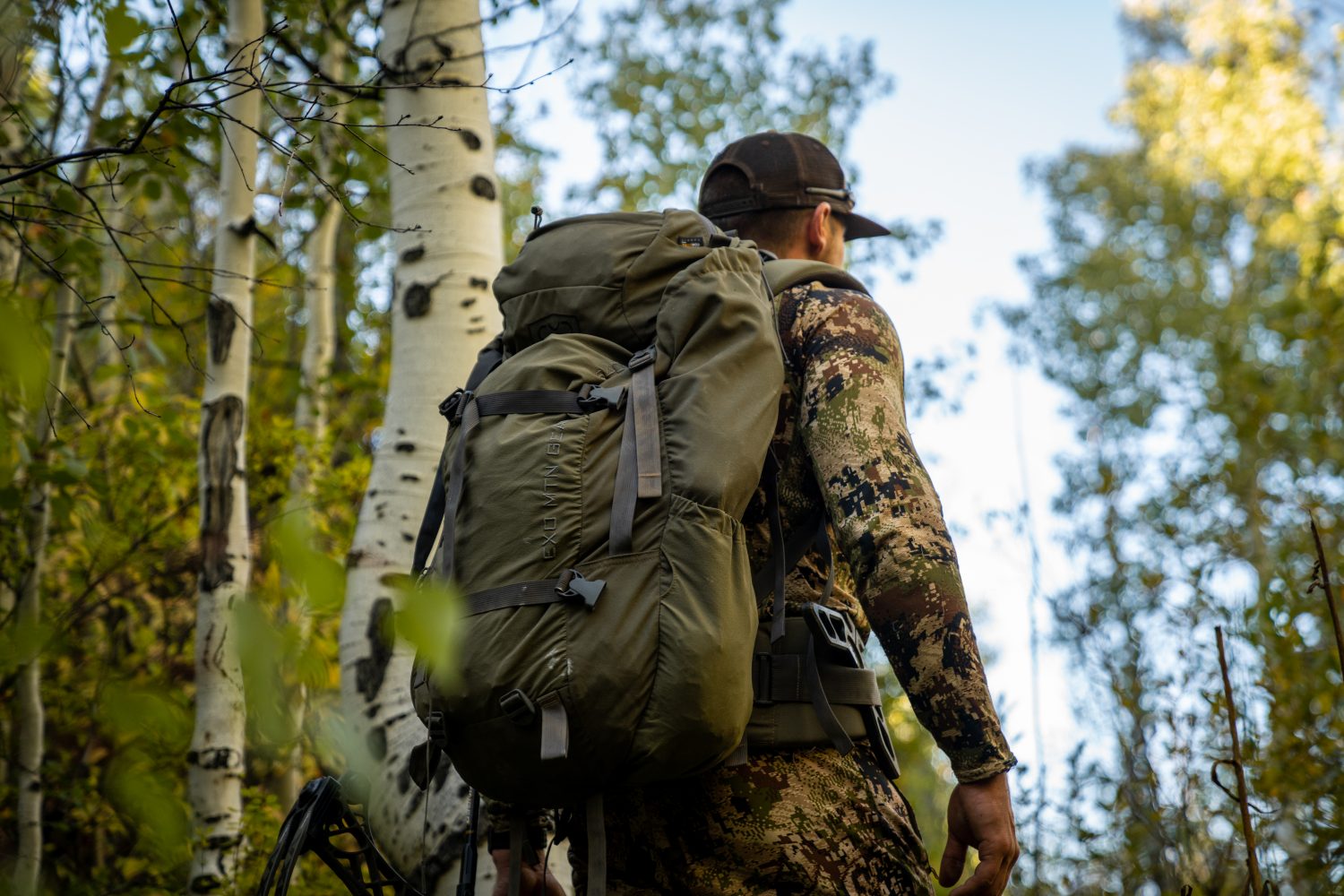 Growing up in the Midwest, I have been a little spoiled with being able to access most of my hunting spots without too much hiking. But the more western hunts I go on, the more I realize the importance of a good hunting pack. If there is one thing I have learned for sure, it’s that your pack is every bit as important as any other piece of hunting equipment you can own.

How Much Storage Do You Need?

Depending on how you plan on hunting, the size of the pack needed is going to vary. By size, I am referring to the amount of storage space in your hunting pack.

Obviously there are exceptions to the rules, so it’s not set in stone. If you’re like me, and pack enough to last you a month on a week long hunt, you will want to get the bigger pack regardless.

My Pack Of Choice

When I began my quest for a new hunting pack, I was a bit overwhelmed at the wide variety of options. I had known about Exo Mtn Gear for as long as I could remember, and was consistently hearing excellent feedback from elk hunters I know on the Exo packs. So I went over to the Exo Mtn Gear website and began looking through their hunting packs.

They have a pack for practically every hunter, and offer multiple different sizes. There is an 1800, 3200, 4800, and 6400. As I said earlier, I personally prefer the more storage, so I went with the K3 frame, and the 6400 pack. My upcoming elk hunt was going to be completely DIY, and we were going to be spending 8 days in the bush. So getting the the hunting pack with the most storage space was a no brainer for me.

The K3 frame is made of ultralight titanium, and only weighs in at 3 pounds. With the 6400 pack, K3 frame, and lid, the whole setup is only 6 pounds when empty. Since I chose the 6400, I was then capable of storing up to 10 days worth of gear on my back easily.

Once I received my pack in the mail, I went over to Exo’s Youtube channel to watch how to properly fit the pack to me. This is extremely important, as you do not want the pack to be uncomfortable when under a load. I put a 45 pound weight in the pack to ensure that I was fitting my pack accurately to what it would be weighing on my elk hunt. Once I got everything fitted with the weight, I started hiking in the evenings with the pack and weight to get used to it. I was amazed at how comfortable I was!

I love having the ability to adjust the weight between my hips and my shoulders with a simple adjustment on the hip belt and shoulder straps. As elk season approached, I traded the weight out for my actual hunting gear. I learned rather quickly that I was going to be walking around with a lot more than 45 pounds on my back!

A couple weeks later, it was time to head out west. Since our hunt was DIY, and we did not have an ATV or any bikes, we would be doing all of our traveling on foot for the next 8 days. It was apparent to me on day 1 that the pack I had on my back was the real deal. Once loaded with water, and all of my camp for 8 days, the pack was coming in at nearly 80 pounds. Not only was the weight distributed well, but the pack itself was extremely comfortable.

There are straps and buckles in several different spots on the pack, and I was able to move things around, and strap them in with ease in just a matter of seconds.

The area that we were hunting was overloaded with scrub oak, and it was brutal on my gear. I was seeing paint scratched off of the riser on my bow, and I ripped my camo pants right off the bat. But one thing that did hold up in that unforgiving brush was my Exo pack. Not only was the scrub oak hard to walk through, but it was nearly impossible to walk through quietly. My hunting partner was wearing a different brand of hunting pack, and it was amazing how much quieter the material on my Exo was. Usually, when you get a quieter material, you get less durable material, but this was not the case.

That hunt was one of the most physically challenging that I have ever been on, and I was scratched, cut, bloodied, and bruised by the end of it. My Exo pack however, was good as new. So if you’re looking for a hunting pack that can handle everything you throw at it and keep going, I would look no further than Exo Mtn Gear. 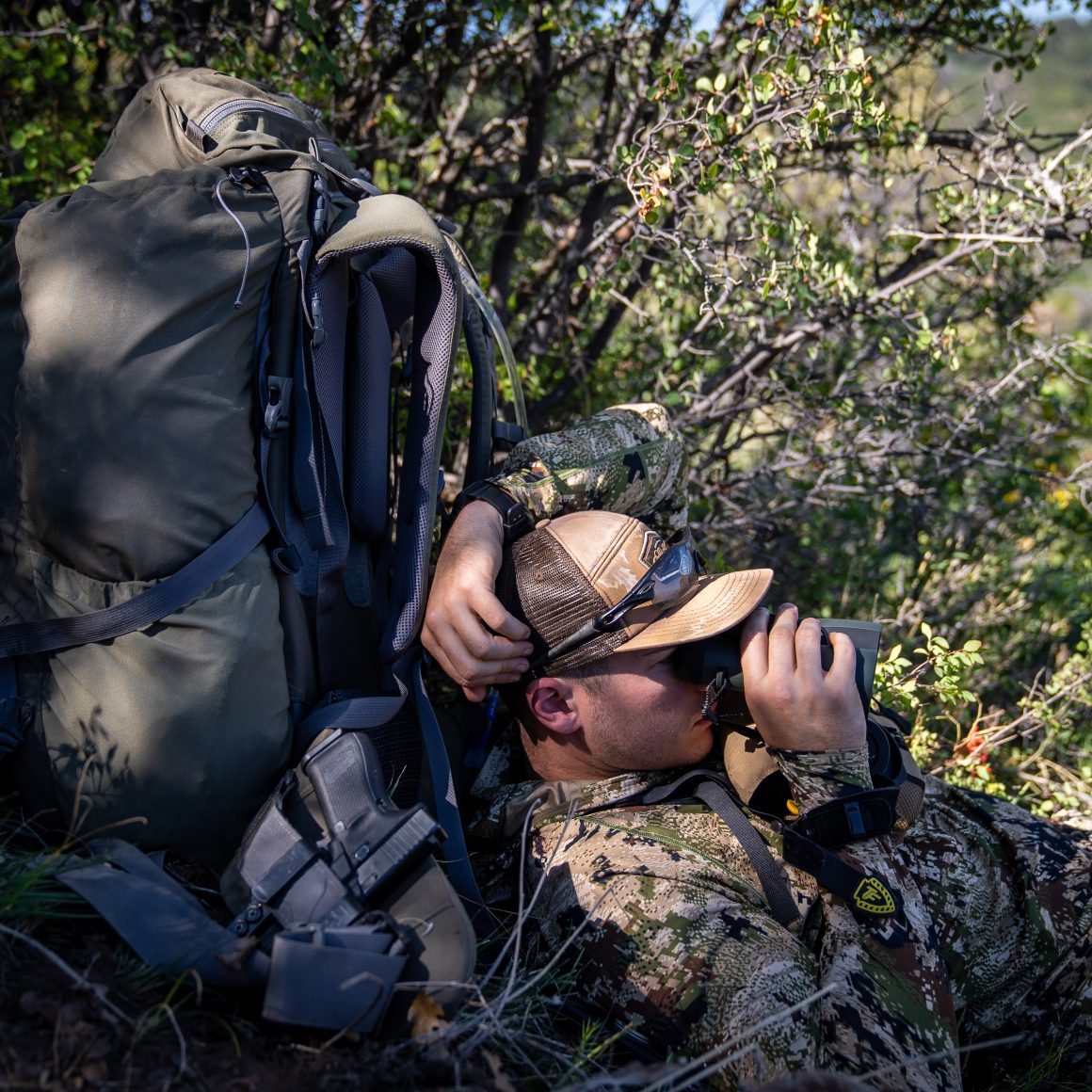